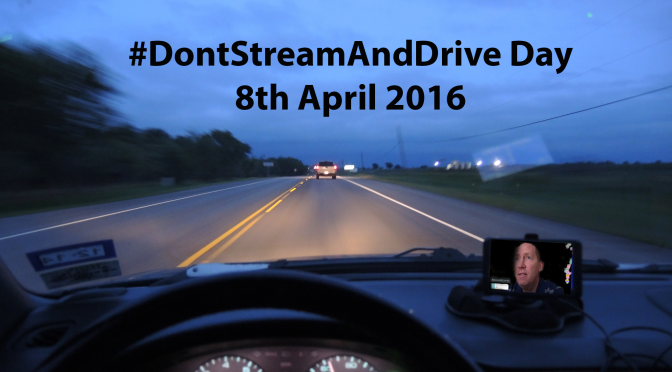 Friends. I need your help.

Driving is a complex operation. A blending of eye, hand and foot coordination that can propel a vehicle down a road at incredible speed. A process that requires skill, judgement, responsibility and places upon you, as a driver, a duty of care to yourself and every other road user.

If done correctly, driving a car fully occupies your attention. Listen to my simple commentary here as I drive down country lanes. Now consider that in a city with pedestrians, cyclists, pedestrian crossings, more traffic, buses, more road signs, junctions and hazards. If you are fully focussed on your driving you have zero time to do anything else.

As phones have become an essential part of day to day life the use of them by drivers has increased. Stand at any busy junction for 5 minutes and count how many drivers you see using a phone. You will be appalled. Studies have shown that driving ability is clearly impaired by using a mobile phone and that talking on a hand-held mobile phone impairs driving more than driving above the drink drive limit. Just think about that for a moment.

The Government in the UK recognise the implications of this behaviour and have, over the years, gradually increased the penalty for this offence. There is currently a consultation on bumping them up again. However, indications are that use by drivers is not reducing.

When questioned many people will agree that drinking and driving is unacceptable but will often happily get behind the wheel after 1 or 2 drinks. When asked, some people will agree that using a phone whilst driving is dangerous but will do it themselves. Why? Because they are a safe driver? There is regularly a disconnect between what people ‘think’ about certain behaviours and what they allow themselves to do.

In 2014, using a mobile phone whilst driving was a contributory factor in 21 fatal accidents. 21 families torn apart with grief. 21 lives needlessly taken because of unnecessary mobile phone use. Have you used a phone whilst driving? Did you think about the consequences and still use the phone anyway… or is this sort of tragedy, the kind of thing that happens to others? You’re a safe driver right? Wrong… if you use a phone whilst driving…. VERY wrong. It can, does and will happen to someone just like you.

But there is more to worry about. This isn’t making phone calls. This isn’t sending texts. This is the massively increasing trend of livestreaming on the internet. Livestreaming is fun and a great way to engage with friends and others online. You can show viewers what you are doing, what you are looking at and let them see who you are, your personality and your life. This is great when in a city and showing the sights, streaming an amazing sunset on Hawaii or the view from a hot air balloon drifting over the Serengeti. It’s amazing and really opens up other peoples worlds to us. There are many platforms to do this from such as Periscope, MeVee, Blab, Meerkat, Facebook and Snapchat. It stands to reason though that live streaming is going to come into the driving arena.

That last sentence is deliberately phrased to give the impression the problem is coming. The reality though is that livestreaming and driving is already here. I’ve spent the last few weeks looking at what people are doing and have been left utterly speechless. Drivers holding phones and broadcasting whilst they drive. Drivers flipping the camera whilst holding the phone whilst they drive. Drivers reading comments that viewers have put on the screen and engaging in conversations. Drivers showing themselves driving and the scary amount of time their eyes are looking at the phone and not on the road. Drivers admitting that what they are doing is probably illegal, reckless or dangerous.. but STILL DOING IT! Drivers who are almost giving a presentation… aiming for some sort of social media celebrity status  and desperately trying to impress viewers.

Yesterday I watched a young woman in the USA, streaming, driving, reading the comments, replying to the viewers and was adjusting her hair at the same time. She had no hands at all on the steering wheel.

The consequences of this new behaviour are very frightening. It will not be long before the first person livestreams their own death or that of another whilst driving.

I have called out a few people over the last few weeks who have streamed and drived. I have tried to point out the dangers and have used some videos to try and reinforce the point.

You can find them all here.

Livestreaming and driving is increasing every day. The people I have called out are roughly split into 3 groups. Those who don’t reply to me at all, those who are in denial (“I’m a safe driver” and “I never touched the phone”) and those who realise what they have done and commit to never do it again.

I’ll finish as I started. ‘I need your help’

On Friday 8th April 2016 I plan to run a #DontStreamAndDrive day.

Over the next few weeks I will be asking you to help support the day. To get the message out to as many people as possible that livestreaming and driving can be a fatal.

I will be asking you as a livestreamer to get online and post a short broadcast with the hashtag. In the broadcast you will give your commitment to never stream and drive, encourage others not to and that you will never watch a broadcast when the host is driving. Those on Twitter who do not livestream will be encouraged to post a picture holding a card with the hashtag or written on their hand in the classic palm forward ‘stop’ style. More detailed info will follow nearer the date.

I plan to speak to as many road safety agencies as I can to gain support. I will approach all my policing colleagues in the UK, North America and beyond to get them to help and share the message both in advance and then support the event on the day.

I know that every right thinking person would want to reduce the number of deaths on our roads. Ironically every streaming driver I have seen would probably say the same…. we need to bridge the gap between the mindset and the behaviour. We need to get the message out there now, nice and early, to current and future livestreamers that streaming and driving is massively dangerous and must not be done.

Thank you for reading. Thank you to those who have supported me so far. Thank you if I’ve touched a chord and you think you will be able to help me in advance of and on the April 8th itself.

The message is really quite simple; #DontStreamAndDrive

I am delighted that #DontStreamAndDrive day has the support of the amazing organisations and police forces; 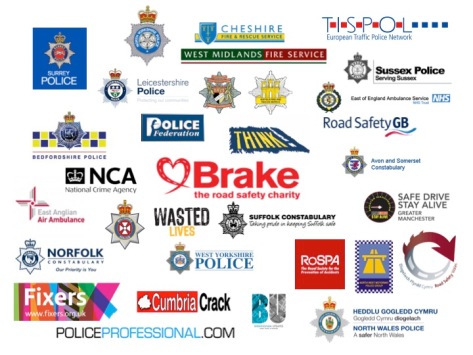 A serving police officer with a UK force who set this blog up when serving as a custody sgt in a 30+ cell custody suite. As of Jan 2014 I am posted in the force control room.

My blog and twitter feed features my ramblings, gripes & observations on policing and life in general with an emphasis on custody, road safety and comms.

I'm a cop but a christian, husband and father first.

Check my other posts

A journey through digital engagement

The highs, lows and oddities of raising two children with two mums and two cats.

Generating conversations about policing in a social era

The Dog, The Allotment and Me is just general ramblings about life!

The ramblings of my thoughts and discoveries