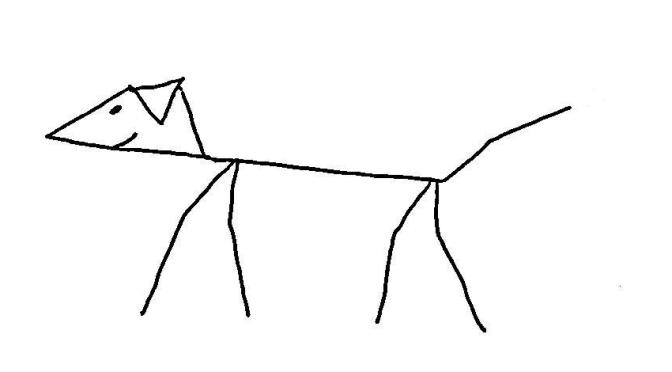 I have quite deliberately stolen the “Stick Family” theme from Simon Guilfoyle. He will no doubt institute legal proceedings and sue me for every penny I have. By my reckoning, if he clears me of all my assets, he may just get enough to buy a pint of Guinness at his favourite hostelry.

The Stick family decided it would be fun to have a dog. Not only would it be a companion to all the family it would also provide some security to their family home. Family meetings were held and eventually a strategy was agreed. This included what purpose the dog had, what they hoped to obtain by having a dog and going to the local kennels to choose said dog with Stick child.

At the kennels there were many dogs and a rigorous selection process followed. Sex, breed, colour, cute factors and how big the dog would get were all considerations. Stick family finally whittled down the list to one dog; Stick dog.

Stick dog was led out

of his cage and was literally bouncing with excitement. A family at last. His purpose was to be fulfilled. Yet this was only the start. A considerable amount of vetting was necessary before Stick family were happy with him and the kennels would let him go.

Stick Child gave Stick Dog all of his free time and walked him all over the local fields and park. When he got home he would play with Stick Dog even more until poor old Stick Dog would be worn out and fall asleep. Stick Child was happy. Stick Family were happy and Stick Dog was fulfilling all the objectives he had been selected for. Life was good.

Stick Child continued to work with Stick Dog and he began to learn lots of new skills. Stick Dog could sit, lie down, stay, fetch, roll over, walk to heel and come back whenever he was called. Stick Child was very pleased and Stick Dog was a happy dog. An optimal balance had been achieved where Stick Child and Stick Dog worked well together, respected one another and as such anything was possible. Stick Child began to suggest to Stick Man that he should take Stick Dog to agility classes.

Then before any agility classes could be arranged things began to change. Stick Child had a birthday and got a bike. His friend had a bike too. Suddenly he spent all his time cycling up and down the road outside and Stick Dog was left indoors. He started to forget about Stick Dog and walked him a lot less than he had done before. Stick Man and Woman picked up the slack and walked him but Stick Dog didn’t find the walks were as much fun. Stick Dog was a little unhappy and on walks he forgot to walk to heel. This was seen by Stick Man as odd and tried to get Stick Dog to do as he was told. Stick Dog didn’t respond well to this as he preferred working as a team with Stick Child. He continued to avoid walking to heel and this led to him getting pulled about a bit on the lead and shouted at. Stick Dog felt a little threatened by this and so tried to keep his distance from Stick Man. This led to more pulling on the lead and more angry responses from Stick Man. Stick Dog would still get to the park but when he was let off the lead he would try to stay away from Stick Man. When he called Stick Dog he would not come to him straight away. The problems just got worse.

Stick Man could not understand why Stick Dog would not do as he was told. Stick Dog was unhappy. Stick Dog then got left at home for a long time one day. He got a bit bored without any attention and decided, for reasons he cannot fathom, to chew the wooden leg of Stick Woman’s dining room table. Stick Woman went crazy. She yelled at Stick Dog and he sought refuge on his bed and cowered. Stick Woman was not impressed and continued to rant when Stick Man came home from work. She also berated Stick Child for what ‘his’ dog had done. Stick Dog stayed on his bed and kept his head down.

That night Stick Child took Stick Dog out for a walk. He felt a little guilty at ignoring Stick Dog but also wanted to get away from his angry Mum. Stick Dog was glum and a very miserable. He didn’t walk to heel and when they got to the park he had no enthusiasm to chase the ball and fetch it. Stick Child found a bench and sat down. Stick Dog sat between his knees and accepted some fuss. As he did so Stick Child talked to the dog. He asked what was so wrong that he wouldn’t do what he could do before and why was he showing uncharacteristic behaviour.

Stick Dog didn’t reply but as the one way conversation progressed two things happened. Stick Dog began to feel a little bit better about himself and Stick Child began to understand what had gone wrong and apologised for ignoring his friend.

On the way home Stick Dog’s demeanour perked up. He played fetch with a stick and he walked to heel and didn’t pull the lead once. Stick Child went into the lounge and Stick Dog came and sat by his feet like he always did. Stick Man noticed Stick Dog hadn’t retreated to his bed as soon as he got in. He discussed with Stick Child how Stick Dog looked happier somehow.

Stick Child pondered for a moment and then told Stick Man that he had let down Stick Dog by ignoring him. He told him that none of them had noticed the messages that Stick Dog was sending to them. They hadn’t stopped to realise that the instant change to the normal conditions Stick Dog was used to had created a change in his behaviour. A change in behaviour that was unwanted and engendered an angry response by all of the Stick Family because he just wasn’t doing what had come to be expected of him. Stick Child told Stick Man that in any period of change each and every person, including the dog, had to have their view heard. They had ignored Stick Dog and that was wrong.

Later that night when Stick Dog was snoring in front of the fire and Stick Child was tucked up in bed, Stick Man thought some more on what had been said. He suddenly drew a comparison to a situation at work that he had been wrestling with for a while. Stick Man had put a great deal of time and effort into recruiting a team of people who were ideally suited to the job and then invested heavily in them. He built a good team that worked well together but some recent changes had destroyed morale. He realised that in order for a team to work well together and ensure everyone is happy it needs inclusion. He hadn’t included the staff in the change process. He realised that if change is implemented it has to be gradual and discussed with all those involved. If changes are simply put in place without any consideration to others and how they feel then an adverse and unwanted reaction is highly likely. Responding to that reaction with more anger and tighter controls is only likely to engender greater resistance to the change.

Stick Man went to work the following day with a whole new outlook on how to implement change at work and it would start by being a good listener and making staff feel valued. It wasn’t the end of the journey but it was a good start.

The Stick Dog image is provided by the Stick Family author Simon Guilfoyle and is copyright! So he tells me. If you pinch it and use without his permission you may get a hard stare from him… believe me.. you don’t want this to happen. Paddington Bear has nothing on him.

A serving police officer with a UK force who set this blog up when serving as a custody sgt in a 30+ cell custody suite. As of Jan 2014 I am posted in the force control room.

My blog and twitter feed features my ramblings, gripes & observations on policing and life in general with an emphasis on custody, road safety and comms.

I'm a cop but a christian, husband and father first.

Check my other posts

A journey through digital engagement

The highs, lows and oddities of raising two children with two mums and two cats.

Generating conversations about policing in a social era

The Dog, The Allotment and Me is just general ramblings about life!

The ramblings of my thoughts and discoveries